Multiferroics are a class of materials with coexisting order parameters.  There is great interest in multiferroics in which ferroelectric and magnetic order coexist, largely driven by the goal of “spintronic” applications.  It has become increasingly clear that implementation of spintronics requires the ability to manipulate the magnetic state of a material through the application of electric fields.  Multiferroics are a promising route to this goal, because of the coupling between their ferroelectric and magnetic order parameters.

In our lab we are currently exploring the properties of the multiferroic compound, bismuth ferrite (BiFeO3 or just BFO).  The reason for this choice is that BFO has the very rare (and potentially useful) attribute that both its ferroelectric and antiferromagnetic order parameters are well established at room temperature.  Despite its obvious potential, research into the properties of BFO has proceeded relatively slowly because of difficulties in synthesizing large single crystals and high quality thin films.  However, in the last few years our collaborator Prof. Ramesh and his group at Berkeley have made rapid progress in the growth of thin films of BFO. 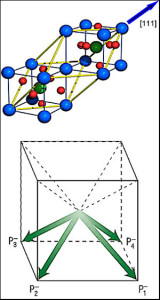 One of the challenges that we encounter in trying to use multiferroic materials is large number of possible domains.  The structure of BFO, shown below, is rhombohedral, only slightly distorted from cubic.  The polarization P, which is the ferroelectric order parameter, points along any one of the four body diagonals, or 111 directions of the cube.  As P can be either parallel or antiparallel with 111, there 8 possible directions, or variants of P, as shown in Figure 1.

The antiferromagnet order parameter is the staggered magnetization or L, which is defined as the vector difference between nearest neighbor Fe3+ spins along the 111 direction. Theory predicts that L lies in the plane perpendicular to 111 (the basal plane) and is parallel to one of the three mirror planes that are perpendicular to the basal plane. Naturally, L can be positive or negative as well, corresponding to 6 possible variants. So far we have 6 x 8 = 48 possible domains. However, we are not done yet! In BFO the nearest neighbor spins are not precisely antiparallel.  They are canted, or tipped slightly away from antiparallel.The canting produces a weak magnetization, M, that lies in the basal plane and is perpendicular to L. The two possible directions of canting finally yields 96 possible domains!

It clear that control over these variants is a crucial step in understanding and applying BFO.  The Ramesh group has demonstrated that they can grow single crystalline thin films with the growth direction parallel to either 111, 110, or 001. Moreover, they can control the number of variants of P in each of these structures.  So, for example, you can ask for (and receive) a 110 film with precisely two variants of P.

One goal of our research in this area is to demonstrate reversible switching of L through control of P by application of E.  To do this we need a probe of P and L that can respond to rapid changes. A serious technological contender should be able to switch with a bandwidth of at least 100 GHz.

Second harmonic generation (SHG) is an ideal probe for this purpose.  SHG is far more sensitive to the symmetry of a crystal than the linear optical response.  For example, in linear response a cubic crystal and a glass cannot be distinguished; both produce an isotropic response.  However, the second harmonic tensor, [c(2)]ijk for a glass and cubic crystal can readily be distinguished. 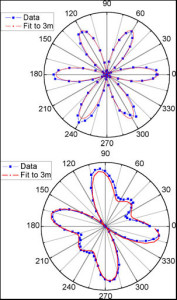 For single variant films, we use SHG to reveal the crystal symmetry.  In the experiment, we set the polarization states of the fundamental and second harmonic beam to be either parallel or perpendicular.  Then we rotate the sample and measure the second harmonic output as a function of angle.  The data that is obtained from a single variant, 111 oriented thin film of BFO is shown in Figure 2 on the top:

The symmetric six fold pattern is a fingerprint that unambiguously defines the crystal’s point group as 3m, which means that you can twirl the crystal though 120 and 240 degrees about the 111 axis without changing the positions of the atoms.  Furthermore, there are three mirror planes that contain the 111 axis and are separated by angles of 120 degrees.

The polar plot in the bottom of Figure 2 shows an angular dependence that is quite intricate (and also is a rather pretty butterfly).  This is what we obtain doing the same experiment, this time on a thin film grown in the 001 direction, also with a single variant of P. Despite the obvious difference, this pattern is also completely consistent with 3m symmetry. Demonstrating this is a fun exercise in transforming 3rd rank tensors (see technical note).

After gaining a thorough understanding of the SHG response in single domain (or variant) films, we are turning to dynamical measurements of domain wall motion in two-variant films. The polar plot (Figure 3 top ) is obtained from a two-variant 001 film.  The fit to the data is achieved with a coherent superposition of the response from equal volume fractions of the two-variants.  The middle plot simulates the SHG response of a sample with equal volume fractions and a sample in which the volume fraction is imbalanced by 5%.  Finally, the Figure 3 bottom plot shows the resulting difference signal.  We expect that a magnitude field, applied in a direction such that the free energy of the two-variants becomes inequivalent, will cause one variant to grow at the expense of the other.  Measuring SHG as a function of electric field modulation (varying both frequency and amplitude) has great potential for studying the dynamics of domain wall motion in this model multiferroic system.

Multiferroics are systems of fundamental interest because in their ordered state both time reversal symmetry and space inversion symmetry are spontaneously broken.  This is a fancy way of saying that the material is simultaneously an antiferromagnet and a ferroelectric.  Breaking both symmetries allows new interactions to occur.  Perhaps most striking is the magnetoelectric effect, the presence of cross coupling terms in the susceptibility tensor.  Normally we imagine that the constitutive relations of the medium can be expressed in the form P=χeE and M=χmH.  We can also express this in a tensor form, as:

Notice that we have included off-diagonal terms that don’t appear in the standard textbooks.  But after all, why shouldn’t P depend on H and M depend on E?  The reason that these off-diagonal terms are zero for most materials goes back to time-reversal and inversion symmetry.  For example, P changes sign with spatial inversion but is invariant with respect to time reversal.  H on the other hand, has just the opposite properties: invariant under inversion, changing sign on time reversal.  Now consider the relation P=χemH. Perform the operation of spatial inversion on both sides of the equation, sending P→ –P and H→H.  If the material possesses inversion symmetry, then (together with all material properties) χem must remain the same, yielding the relation –P =χem­H, which is consistent with the original relation only if χem =0.  The reasoning is the same for the time-reversal operation.  We see that the condition for off-diagonal terms in the constitutive tensor is that the material must break both inversion and time-reversal symmetry.

The potential for coupling M and E is what makes multiferroics interesting from fundamental and applied points of view.  Measuring the coupling with static probes can be difficult.  This is especially true for BFO where the large background conductivity complicates measurements of polarization.   One of the most promising ways to probe the coupling of electricity and magnetism in BFO is through the modes of oscillation of the different order parameters.  With the onset of antiferromagnetism a new low-frequency mode, the antiferromagnetic resonance (AFMR), appears.  For a perfectly isotropic antiferromagnetic this mode is at zero frequency.  In most materials spin-orbit coupling breaks the isotropy and the AFMR acquires a nonzero frequency, even in the absence of an applied magnetic field.  In a typical antiferromagnet, AFMR appears in optical reflectivity or transmission through the coupling of the magnetic dipole moment of the spins to the magnetic field of the light.  The signature of coupling via the magnetic dipole moment is quite pretty and is discussed below.

Let’s remind ourselves of the reflectivity resulting from the typical electric-dipole response (above left), for example an infrared active phonon. The reflectivity has the classic “dispersive” shape. Starting from high frequency, there is a dip, a rapid rise, then a gradual decrease. Surprisingly enough, the pattern is just the opposite for a mode that couples to the magnetic component of the light through the magnetic moment (shown in Figure 4 right).

Recently, we have been studying the far-infrared optical response of BFO crystals and thin films. Working together with the group of Prof. Zack Schlesinger at UC Santa Cruz, we have discovered a low-frequency mode that had not been reported previously. The frequency of the mode, about 20 cm-1; or 600 GHz, is squarely in the spectral region where AFMR modes of materials whose magnetic structure is similar to BFO, for example the orthoferrites, RFeO3. However, this mode shows a frequency-dependent reflectivity that is characteristic of an electric-dipole active mode.

The graph on Figure 5 left illustrates the temperature dependence of the reflectivity. The graph on the right compares the reflectivity at room temperature with a fit to a sum of Lorentzian oscillators. The lowest energy feature is the new one. Note that it has the shape of an electric-dipole active mode despite being well below the frequency of optically active phonons. We have further evidence of the strength of this mode from THz spectroscopy. Below left is the THz transmission spectrum of a crystal of BFO. We compare this with the same experiment performed on a typical orthoferrite, TbFeO3. The single sharp peak in TbFeO3 is known to be caused by AFMR. Note that the absorption in BFO takes place in the same frequency range, but is much stronger.