Pump-probe measurements of transient absorption and reflection are the time-honored, and most

straightforward, methods of exploring excited state dynamics. Exciting a material with laser pulses populates quantum states above the ground state of the system, creating a nonequilibium density of quasiparticles. The excess quasiparticles affect the optical properties of the material, causing a small change in the index of refraction. The change in index as a function of time after injection of the excess quasiparticles can be measured via a time-delayed probe pulse. A probe pulse that is synchronous with the pump is obtained by either a beamsplitter or transmission grating.  The arrival of the probe at the sample is delayed relative to the pump through the use of a moving mirror that varies the optical path length.  In the experiment, one then measures the amplitude of the transmitted or reflected probe as a function of arrival time after the pump. The rate of decay of the absorption or reflection tells us about the lifetime of the photogenerated excitations.

Transient grating spectroscopy is an elegant method that uses optics to measure quasiparticle propapagation.  In this technique two laser pulses, rather than just one, excite the medium.  The interference of the two laser pulses creates a standing wave of laser intensity.  Instead of the uniform excitation of the surface produced by a single pulse, the excitations are now organized into parallel stripes.   The periodic variation of excitation density transforms the surface of the sample into a transient absorption or reflection grating.  The depth of modulation of absorption can, in principle, be measured by diffracting a  time-delayed probe beam from the transient grating. The modulation depth will decay as quasiparticles propagate along the excitation density gradient.  The rate at which the modulation decays is a measure of the speed at which quasiparticles propagate.  The ability to vary the spatial wavelength of the grating gives detailed information about the dynamics of propagation.

Working in 2002-03, Nuh Gedik (at that time a graduate student) developed techniques that enabled us to perform these measurements.  The main obstacle he faced is that the modulation of reflectivity brought about by the photoinjection of long-lived quasiparticles is of order 1 part in 105.  As a result only one part in 1010 of the incident probe intensity is diffracted from the transient grating!  This several orders of magnitude below the level of scattered light from surface roughness. To overcome this problem he used a variation of the coherent heterodyne detection scheme pioneered by Goodno et al. and by Maznev et al. The technical advances are described in Optics Letters.  With coherent heterodyne detection a signal proportional to the electric field, E, rather than the intensity, |E|2, is detected.  This increases the ratio of signal to scattered light by five orders of magnitude.

Even with this improvement, the experiment was not an easy one.  The experiment requires overlapping four beams on the sample, and detecting two of the reflected beams.  The beam path is so convoluted that we could hardly draw it! A schematic version of the experiment that uses a transmission, rather than reflection geometry, is shown below.

Using this apparatus, Nuh was able to measure the propagation of electronic excitations in a superconductor directly for the first time.  The results of this experiment were reported in Science.  Our experiments confirmed the existence of a long-lived, slow moving excitation known as the “antinodal quasiparticle.” The properties of these particles are important because they play a crucial role in the pairing interaction that leads to superconductivity.

The transient grating technique described above can be readily extended to perform measurements of spin diffusion, rather than quasiparticle diffusion.  At first glance it might seem that diffusion of quasiparticles and spins would proceed at the same rate, in as much as each quasiparticle carries along its spin ½.  However this turns out to be far from correct and a large number of interactions and effects drastically change spin relative to charge diffusion.  Among these are localization, exchange interactions, and spin Coulomb drag effects. 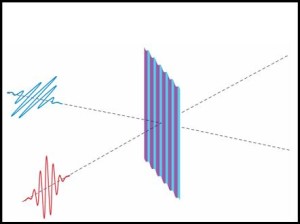 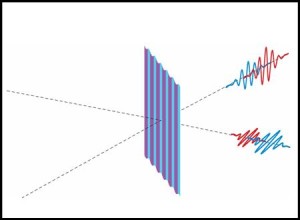 In principle, measuring spin, rather than charge, diffusion requires one simple change in the setup; the pump beams are now polarized orthogonal to each other (and the same for the probes).  The interference of orthogonally polarized pump beams does not lead to a standing wave of intensity,  in contrast to parallel polarized pump beams.  The interference of orthogonally polarized beams induces instead a standing wave of photon helicity, that is stripes of alternating right and left circular light.  In certain materials, such as the III-V semiconductors, circularly polarized light excites spin polarized electrons to the conduction band.  In such materials the photon helicity wave creates a transient spin grating in the semiconductor, represented by alternating stripes of blue and magenta in the cartoon above.

Coherent detection of the transient grating is performed with orthogonally polarized probe pulses, as illustrated above left.  Each of the probe pulses is both transmitted through and diffracted by, the transient grating.  The component of the pulse that is diffracted from the spin grating has its linear polarization rotated by 90° and is redirected to emerge collinear with the transmitted component of the other probe (illustrated above right).  The pulse paired is then beamed to a square law detector whose dc output contains a “heterodyne term,” proportional to the product of the diffracted and transmitted electric fields.  In this way the amplitude and phase of the diffracted electric field is measured directly.

The transient grating apparatus decribed above measures the lifetime of periodic waves of photoinduced spin polarization.  In most cases, it is also important to measure the lifetime of a spatially uniform spin polarization, equivalent to setting the grating wavevector to zero.  For these measurements it is more convenient to use a different experimental arrangement that allows us to detect the transient magneto-optic Kerr effect.

The magneto-optic Kerr effect (or MOKE) is the rotation of the direction of linear polarization caused by reflection from the surface of a magnetic medium (as illustrated below).  The transient magneto-optic Kerr effect (T-MOKE) is a pump/probe method wherein the pump beam changes the magnetization of the medium.  The relaxation of the magnetization to its equilibrium magnitude is probed via the Kerr rotation of a time-delayed pump beam.  Using a sensitive balanced detection scheme is it possible to measure rotations at the 1-10 m rad level.

In our lab we use other techniques that rely on optical pulses but do not involve transient or nonequilibrium phenomena.

crystals and thin films (for a more complete description see “areas of research.” The experimental arrangement for measurement of second harmonic generation (SHG) is relatively simple and the analysis of the data is a fun exercise in tensor tranformations. To measure SHG we beam our Ti:Sapphire laser pulses (wavelength about 800 nm) at the sample and measure the second harmonic (400 nm) light that appears collinear with the fundamental. To select different elements of the second harmonic tensor we use polarizers before and after the sample. These define the polarization state of the fundamental and the second harmonic that reaches the detector. The information about crystal symmetry is revealed when the sample is rotated!

Time-domain terahertz (THz) spectroscopy is a method for far-infrared spectroscopy based on short optical pulses.  A diagram of the apparatus is shown below.  The laser beam is split and one beam path has an adjustable length, just as in the classic pump/probe arrangement.  However, in this case the beams excite a THz emitter and detector, rather than a sample under study.  The emitter and detector are actually the same device, biased differently.  Both structures consist of two parallel strips of metal with a separation of order 10μm.  At one point along their length they are bridged by a semiconductor film. This film has the property of not conducting electricity unless it is photoexcited.  In the case of the emitter the metal strips are voltage biased.  When the structure is excited with a short laser pulse a burst of photocurrent passes through the semiconductor, producing a pulse of THz radiation.  This is the same method of generation that was used by Hertz to demonstrate that light is an electromagnetic phenomena.

The THz radiation is directed to the sample and then to the detector using four curved mirrors, as shown above.  The scheme for detection of the transmitted THz pulse is essentially the inverse of the generation process.  Instead of a battery applying a dc bias, the metallic strips are biased by the THz pulse that reaches the detector.  This bias will not yield a current unless the the detector is “gated” or switched to  the “on” state by excitation with a light pulse.  When the light pulse arrives at the detector, it induces a photocurrent proportional to the amplitude of that portion of THz pulse that has arrived at the same time.  This photocurrent is detected by a sensitive current amplifier.  By varying the delay between the light pulse that generates the THz pulse and the one that gates the detector “on,” we can measure the amplitude of the transmitted electric field as a function of time.  Fourier transform from the time to frequency domain yields the transmission or reflection spectrum of the sample under study.  A bonus of this form of spectroscopy is that we measure the complex reflection, r,  or transmission t,amplitudes, which contain more information than  |r|2 or |t|2.